Canadian singer-songwriter and actress Kate Todd joins the legendary Ron Sexsmith as his special guest at The Historic Gayety Theatre on Friday, August 3rd in Collingwood, ON.

KATE TODD's original song 'My Country' in the FINALS of the Canadian Songwriting Competition
​songwritingcanada.com/winners
​

KATE EARNS NOMINATIONS at Josie Music Awards for Female Artist of The Year  and Song of the Year for her original song 'Youre Gonna Find Out' in the Modern Contemporary Country category. The Josie Music Awards are held in Nashville, TN in September 2018.

Kate received the International Women's Achievers Award for her charitable work in support of Women's rights and raising Global Awareness to Violence Against Women and Young Girls. 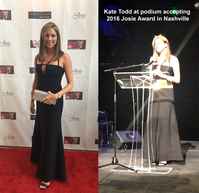 After winning the 2016 Josie Award for Versatile Entertainer Of The Year Award in Nashville, she is recognized again with   2017 International Women Achievers' Volunteer Award. This award recognizes women who are engaged in voluntary service benefiting the community and/or country. 2017 I.W.A. Awards at Toronto Plaza Hotel Oct 7, 2017. What a thrill it was Sunday night to be selected as this years Most Versatile Multimedia Award winner at the 2016 Josie Awards held in Nashville Tennessee. To receive this award and be recognized internationally for my work is an honour I find most gratifying and shall treasure always!
KATE TODD  Canadian Songwriting Competition Finalist ~ Anywhere With You
​KATE TODD ~ VOICE OF UN SONG FOR WORLD DAY OF SOCIAL EQUALITY 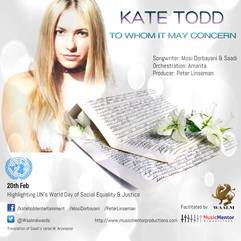 ​Kate Todd added her heart & voice to the Nobel Peace Prize Nominated WAALM song 'To Whom It May Concern' and cutting edge video with Animation by Rushanthan, highlighting the UN’s  WorldDayofSocialEquality&Justice. WAALM Founder Mosi says, “The North American versions will be recorded by Canadian star, Kate Todd. She possesses one of my favourite voices of all time. I truly admire her talent and her efforts for humanity.” The pursuit of social equality and justice for all is at the core of many UN affiliated global missions promoting human dignity. A recent WAALM project & song 'Should've Told' featuring Kate Todd/Kyle Shedrick was nominated for the prestigious 2016 Hollywood Music In Media Awards
​
Kate Todd has been chosen as the Canadian Ambassador for the incredibly fun and free karaoke app Wurrly.com.

Wurrly is the ultimate singing social network. Singers, musicians, fans, and music lovers use Wurrly to record and listen to highly customized video cover versions of their favorite songs. 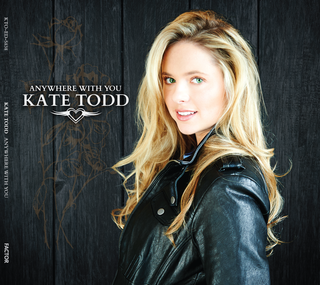 ﻿﻿
ANYWHERE WITH YOU ALBUM
​
Kate was on the road this past summer for her National TV & Radio Promotional Tour promoting her                 sophomore album and national single releases  'Anywhere With You' and 'My Country', The largest
​    Indie Record Label in the world, eOne Music signed Kate to a world wide distribution deal. 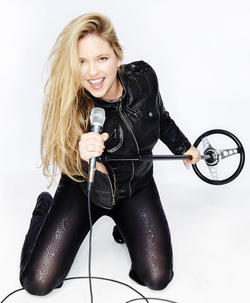 ​Hot off the heels of her first single of 2015, “Anywhere With You”, the title track from her sophomore CD, Kate Todd is proud to release her summer single ‘My Country', an autobiographical song about her musical influences, which ultimately inspired her signature brand of country music. 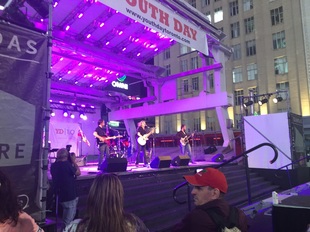 YOUTH DAY Toronto July 5th 2015 at Dundas Square﻿​
​
Performing at 9th Annual YOUTH DAY Toronto as newly appointed Official YOUTH DAY Ambassador, over  30,000 people celebrated youth and watched feature act KATE TODD BAND perform. The YOUTH DAY  crowd also joined  Kate for the singing of our national anthem for The Flag of Canada Project and the SIPO  Foundation, where she is a  director and spokesperson. 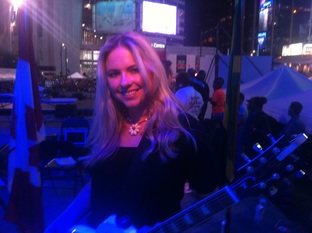 Kate’s cool and clean image has attracted partnerships with her record label eOne Music, sponsors Harley  Davidson and  Gibson Guitars, and has garnered her spokesperson roles for The Flag of Canada Project, SIPO  Foundation, and as  an Official YOUTH DAY Ambassador. 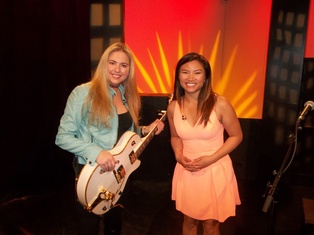 Kate Todd Wraps Up her Western Tour Of Canada